About the cat breed Don Sphynx 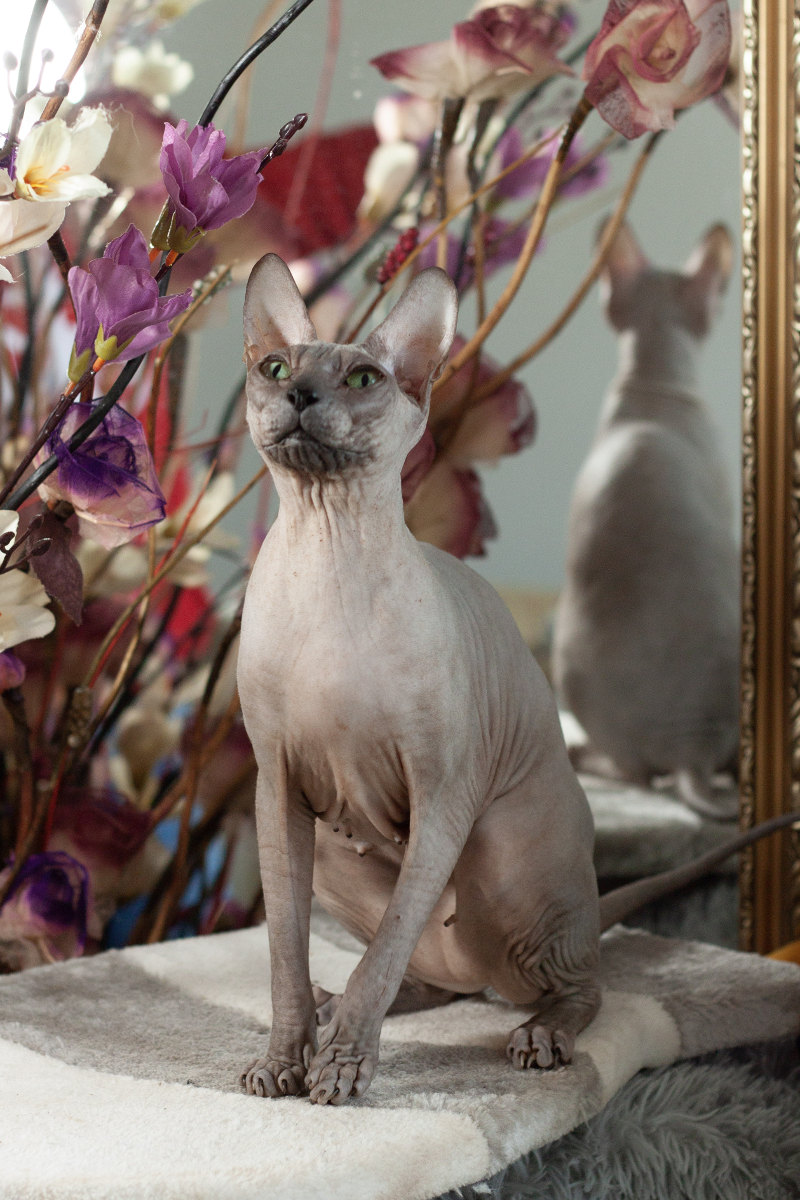 There is no more devoted, gentle and loving creature in the world than the Sphynx cat. Several species of Sphynx have been bred, but only the Don Sphynx is a breed that has no fur. The Don Sphynx is a noble, hairless animal with skin that resembles that of a human, a very unusual and unique characteristic that is unique to these cats.

The qualities of this magical creature are: absence of fur, cleanliness, high intelligence, boundless love for people and animals, kindness and sensitivity, excellent health, penetrating mind.

The body temperature of these “bald aliens” reaches almost 40°C, which makes them an even more interesting breed. 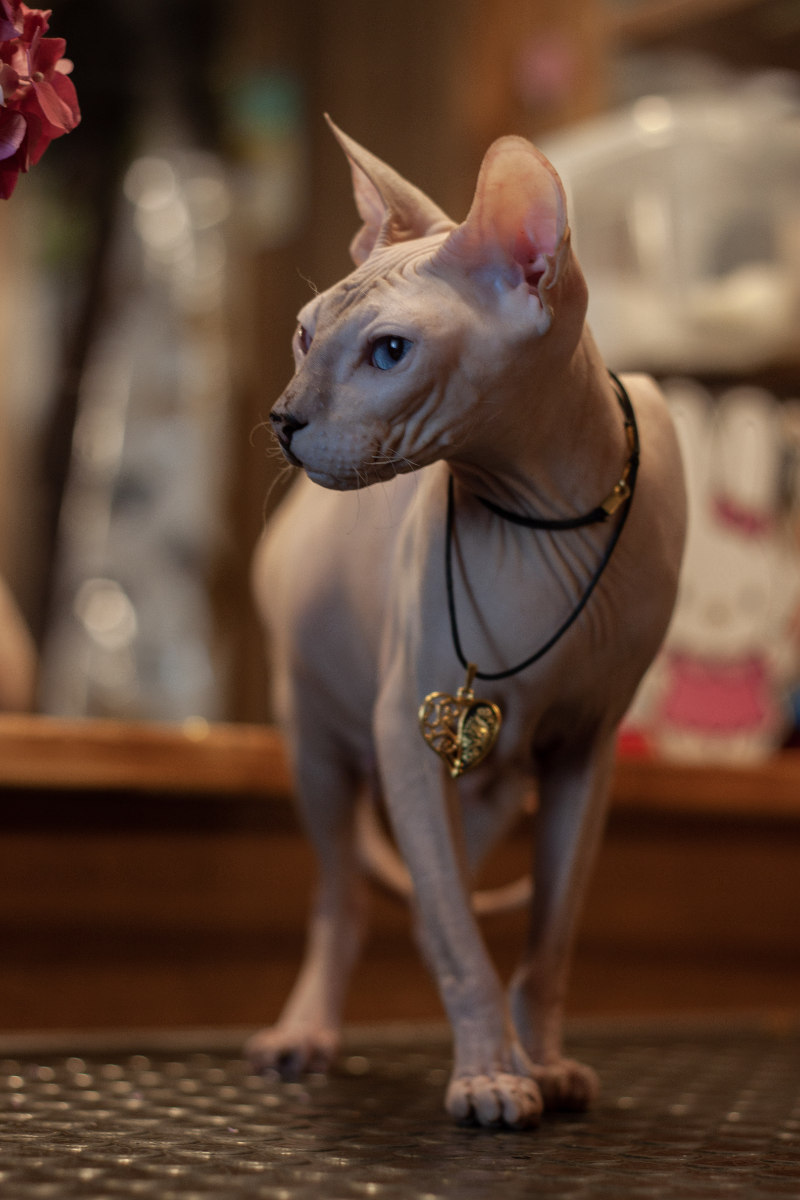 The Don Sphynx has large bat-like ears, inquisitive almond-shaped eyes and can be mistaken for an elf or alien creature with a little imagination. This unique appearance is the result of its own spontaneous genetic mutation.

The Don Sphynx is the first hairless breed that we started to breed. It will always remain special to us because we will never forget the first encounter with an absolutely hairless animal. These wonderful feelings cannot be described in words. And their amazing soul is reflected right in their bottomless eyes. If you want to have a creature that truly loves you, then it’s the Don Sphynx.
These cats love their owner sincerely, faithfully and for all their lives. They do not like you for the tasty food and warm home, they are attached to you with their whole soul, it is impossible to bribe them with anything, their owner and his family is the whole world for Don Sphynx.
Don Sphynx is perfectly trainable, they are comfortable and pleasant to travel with, they are very sweet and have not a drop of aggression in them, they adore children, they are friends with dogs and other animals. They love cleanliness and do not make a mess. They are great for allergy sufferers and generally for all people with any disability and of course without.

Rubber Bald - (completely naked) completely hairless skin , hot and soft to the touch. Multiple folds on the body, especially on the head, neck, groin and feet. The completely naked type is born bare and remains so throughout life. They are the most valuable cats for breeding.

Flocked - (suede) animal skin is covered with very short soft hairs that are almost invisible to the naked eye (reminiscent of peach fuzz). The skin is softer to the touch. Usually by the age of two, these cats ``shed`` completely.

Velour - (velvet) hairs are longer (2-3 mm) and conspicuous. They may also disappear with age. The names velvet and velour come from the names of fabrics that feel like the skin of these cats.

Brush - (brush, bristle coat) cats have a relatively long, hard, curly and sparse coat (like an old brush) with bald areas on the head, upper neck or back. Representatives of the breed with such a marking have little felinological value, they do not win titles at shows, but are admitted to trials, however, they are mainly used in breeding. This is due to the fact that you cannot cross two hairless animals. Such kittens are more likely to be born with major mutations and will not be viable.

A LITTLE BIT OF HISTORY

The Don Sphynx is a breed of Russian hairless cats, DSP (code for international breed and color designation) according to FIFe classification, DSX according to WCF classification. “The cat is characterized by a muscular body without hair, soft and hot skin to the touch, long and slender paws with long and thin toes, a long tail, a distinctive muzzle, large ears, large almond-shaped or slightly narrowed eyes. They are characterized by great devotion to humans and have a complete absence of aggression.”

The Don Sphynx is one of the few original Russian cat breeds. The history of this breed began in 1986 in the city of Rostov-on-Don. Elena Kovaleva, an assistant professor at the local pedagogical institute, on her way home from work found a kitten on the street – a very ordinary one and took it home. The kitten was named Varvara. In a short time, the kitten began to lose the fur on her head and then on her back. The new owner first thought that the absence of fur was a sign of illness, but later it turned out that this characteristic is inherited.

In 1988, Varvara was first shown to purebred cat breeding experts, but unfortunately this cat did not impress them. On February 20, 1990 Varvara gave birth to three cubs with a European Shorthair male, Vasil. Their daughter Chita is considered the founder of the breed. The breeding of these cats was started by Irina Nemykina, who later became a felinologist and is now one of the world’s renowned felinologists. And then, after a long effort of Irina Nemykina, the breed of cat was selected, which today is registered as a breed of Don Sphynx. 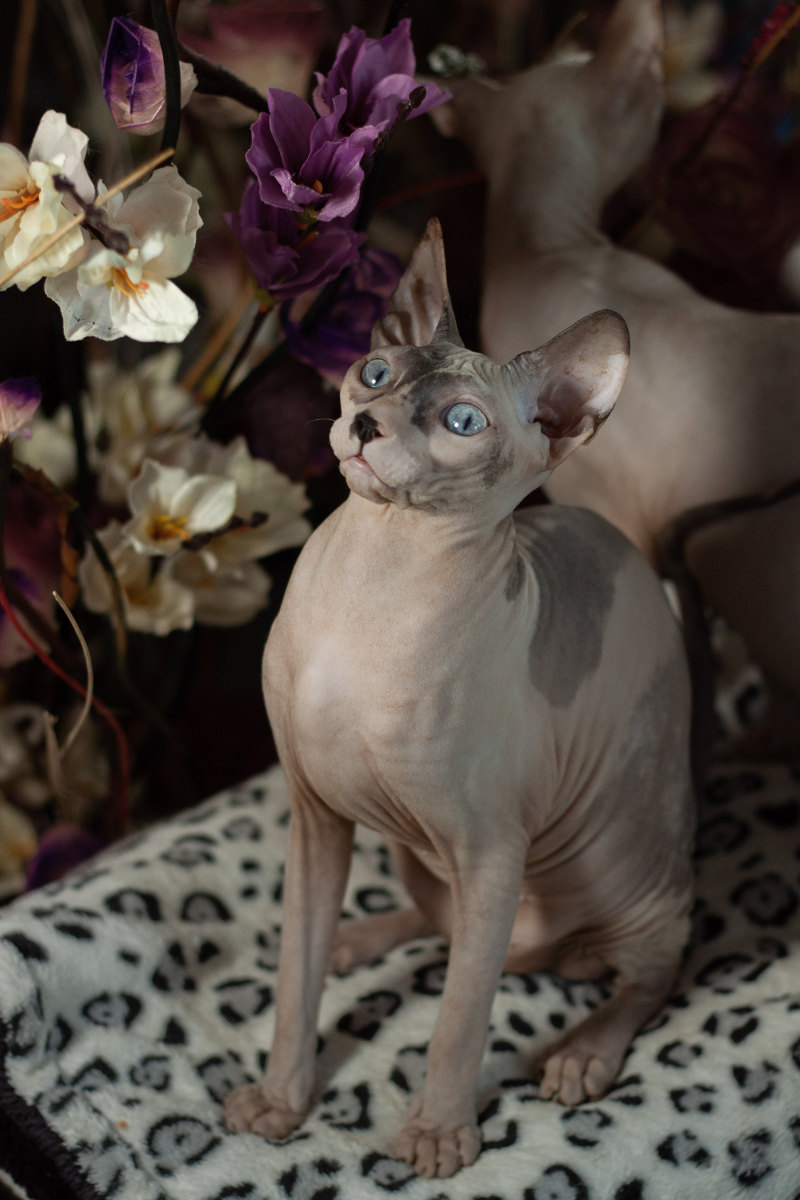 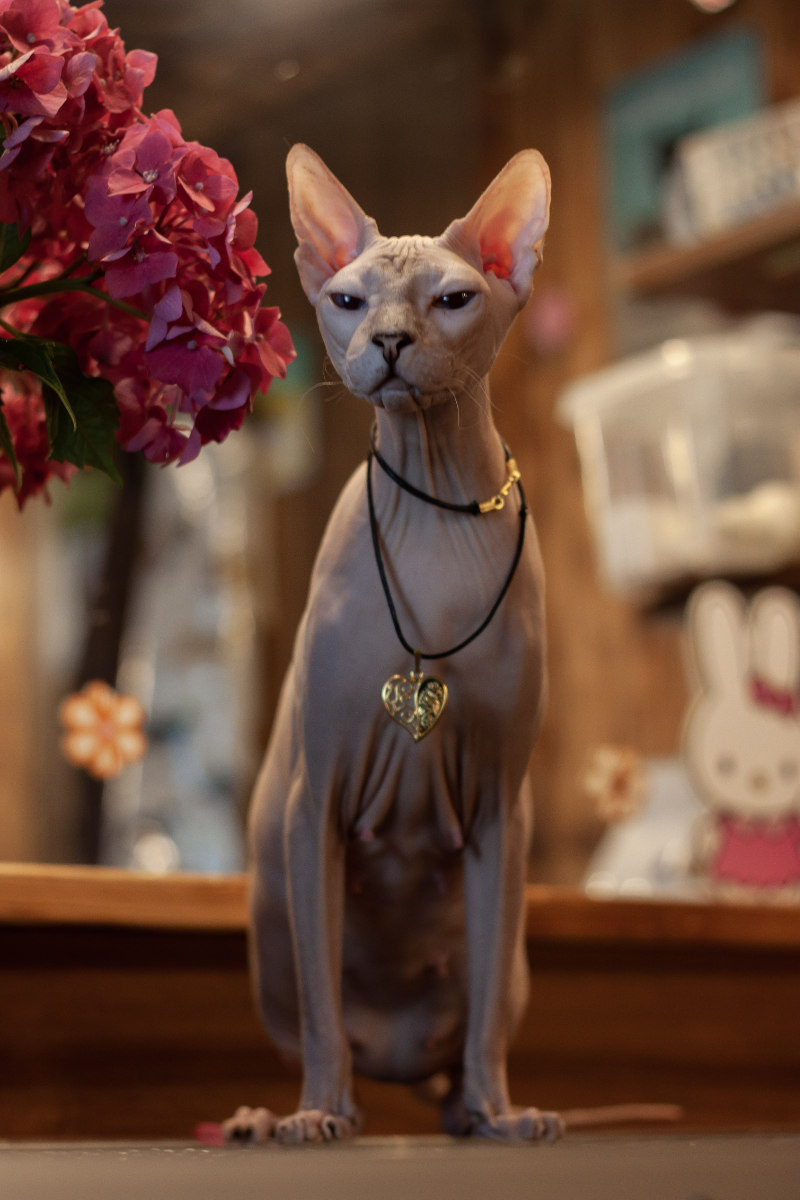 Caring for the Don Sphynx cat breed is not particularly complicated compared to caring for other breeds. Don Sphynx cats are very hardy and strong individuals that do not have health problems and do not require special conditions when properly cared for. It is just important to remember that the skin of hairless cats behaves like human skin. They sweat when it is hot and bask in the sun. The cold affects them in the same way as it does humans.

Due to their naturally higher body temperature near 40°C, these animals have an accelerated metabolism and this requires proper nutrition. Don Sphynx cats have a large appetite and they are not very picky when it comes to food. The food for this breed is selected taking into account the physical characteristics of the cat and its preferences. Like other pets, it is not recommended to give very fatty food to Sphynxes. When we hand over our kittens to their new owners, we always prepare detailed nutritional recommendations for them.

Hygiene is also very simple.
Sphynxes produce more earwax than other animals. Because of this, the ears need to be cleaned approximately every 4 days.
Bathing should be done according to the level of soiling. Hygienic products can be baby soap, products for sensitive skin without harmful additives. An alternative hygienic method may be wiping: apply olive oil to the cat’s dry skin, massage the whole body and wipe off any residual fat in a towel, then rinse the skin with water and wipe the cat dry.
If the cat is running around the house all day, dust may get into its eyes. In this case, you can wash the eyes with boric acid, which can be bought at the pharmacy.